Like I have written in numerous postings, I knew when the Democratic US Senate race went to runoff, there would be more of the same old tired calls for IRV. And I even said that these claims would be couched as "a better way".

Sure enough - here comes another such bogus claim in the form of an AP wire story printed in the Daily Reflector: - it should be called the Daily Mirage!

Is there a better way than primary runoff for NC?

Is IRV confusing for voters? Yes - the numbers provided by Dr. Cobb's survey show that 25% of Cary voters and 33% of Hendersonville voters didn't know they'd be expected to rank their choices in the 2007 IRV elections. This were numbers from an exit poll conducted by IRV advocates. Some of those folks failed to follow instructions for educating voters on the way in - in order to provide a more positive outcome for the survey. So it's very likely that a greater percentage of voters might not have understood or been ready for IRV.

Another survey done in 2008 by the Town of Cary (no IRV advocates asking the questions) showed that 30% of voters didn't understand IRV.

It looks like a majority of people understand IRV and were ready to rank candidates, but those numbers are shocking for several reasons. IRV disenfranchised 25% of those Cary voters and 33% of those Hendersonville voters who bothered to show up. 30% of Cary voters didn't understand IRV - so how many people are going to take part in an election they don't understand or know they have to rank candidates in? If we want more voters to participate in elections - we don't want to make it so complicated that voters will stay away.

And these two experiments took place in communities where they have a very educated and literate voting population. Across our state, NC has some terrifyingly low rates of adult literacy in many of our counties. Do we really want to make voting more complicated for the very people that have the greatest stake in voting to elect the right people to make public policy choices to help get these people better education, jobs and opportunities in life?

Is IRV easy to count? No - in fact there are no certified voting systems we can purchase here in NC that are able to tabulate IRV ballots. Our own NC State Board of Elections said as much in March 2007 when they said it was too risky to use IRV in the May 2008 primary election unless we have certified upgrades.

The stuff we have won't do IRV unless we jury-rig the hell out of it and violate all sorts of election law and regulations. There is no way to do all the vote counting at precincts which our law now requires.

How would we tabulate IRV ballots cast on DRE touchscreen voting machines? Simple - you load the 2nd and 3rd column votes into an Microsoft Excel spreadsheet (no federal certification for election use - and how do you verify it's been done right?) and then let the machines do the work. It's impossible to duplicate this procedure by hand as required by NC election law. And whether you vote on paper op-scan ballots or on a DRE machine - each IRV election would have to be done totally separate before doing another one - and recounts would have to wait till ALL IRV contests are settled. Recounts and election audits would be so complicated and expensive that we'd be finding reasons NOT to do them - and then changing our laws to eliminate the need for them.

Election integrity advocates worked very hard to get the Public Confidence in Elections Act passed in 2005, over the objections of electronic voting advocates and others who were also pushing IRV. IRV advocates claim they are only advocating electoral reforms that make the process more democratic, but IRV's complexity tends to incentivize more complex and costly electronic voting equipment that makes IRV easier to administer but less verifiable.

So why are all these editorial boards pushing IRV when it doesn't deliver on promised benefits? Or can't they do critical thinking and just want to throw the baby out with the bathwater?
Posted by Chris Telesca at 3:49 PM 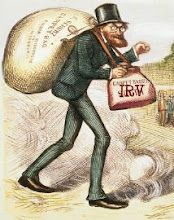 Does he look like anyone who pushes IRV for a living? ;-)